Apart of the Tornado Outbreak of May 30-31, 2018, the Clyde EF4 first touched down at 2:06 PM CDT southwest of Novice as a weak, rope-like EF0 tornado. Breaking branches off of trees, pushing over shallow-rooted trees, and minorly damaging a car, the tornado strengthened, becoming a low-end EF1 stovepipe tornado.

EF1 to low-end EF2 damage was observed at multiple properties in southeastern, eastern, and northeastern Goldsboro. The tornado weakened slightly, causing high-end EF0 damage. While it looked like the tornado was going to dissipate, the tornado was able to stay on the ground and began to strengthen once again around a forward speed of nearly 90 mph.

EF2 damage occurred to farm southwest of Clyde. Here, a farmhouse was significantly damaged, and a barn was partially destroyed. 4 cattle were killed at this location. Intensifying further, high-end EF2 to low-end EF3 damage was observed to a couple farms, where one farmhouse was partially swept of it's foundation. However, the damage at the location was rated EF3 due to the structure being poorly-built.

Entering Clyde, drastic intensification occurred as the tornado reached peak strength. 49 were killed and 170 were injured as a trio of neighborhoods were leveled, including multiple homes being swept clean of debris. However, idiotic engineer Timothy Marshall rated the damage at 200 mph EF4 due to all homes being swept clean of debris missing only a single washer of their respective anchor bolts. However, the NWS agreed and rated the damage stupidly at high-end EF4.

Clyde High School was leveled, with 15 people being killed at this location. An additional 25 people were injured. Weakening drastically, low-end EF2 damage occurred to many mobile homes in eastern Clyde, injuring another two. The tornado continued to weaken, causing EF0 to EF1 damage before dissipating at 4:19 PM CDT after killing 64, injuring 197, and causing $1.4 billion (2018 USD) in damages. 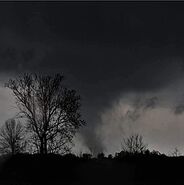 The funnel cloud that would produce the Clyde, Texas EF4. 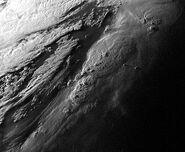 The supercell that produced the Clyde EF4 on radar.
Add a photo to this gallery

Retrieved from "https://hypotheticaltornadoes.fandom.com/wiki/2018_Clyde,_Texas_Tornado?oldid=55515"
Community content is available under CC-BY-SA unless otherwise noted.