As the 46th EF5 confirmed tornado and the first in South Dakota in over 50 years, maximum wind speeds inside the tornado reached 297 mph (477 km/h). Apart of the record breaking 2018 tornado season, it was one of the more powerful EF5's.

First touching down as a pencil-like tornado, EF0 to EF1 damage was recorded when dozens of trees and a couple of houses were damage. Intensifying into a large-wedge EF3, 4 deaths along with 234 injured when 2 mobile home parks were hit.

Reaching it's peak strength and entering Webster, 42 were killed along with 643 injuries when at least 6 neighborhoods were completely leveled, leaving catastrophic damage. At 6:33 PM CDT, multiple mobile radar trucks recorded wind speeds inside multiple vortices between 107 and 297 mph (172 and 477 km/h).

Entering another neighborhood at peak width and strength, 15 more people were killed along with 30 injuries when the neighborhood was leveled at high-end EF4 to EF5 intensity.

At 7:06 PM CDT, a tornado emergency was issued for Day County. The last 20 were injured when the tornado hit a mobile home park after being leveled at EF2 to EF3 strength.

Multiple surveyors have stated that some of the damage is the most extreme they have ever seen, while it is the most powerful tornado in South Dakota history, passing the 264 mph wind speed of the 1998 Spencer F4.

The following day, the NWS sent many survey teams to determine the intensity of tornado based on damage. The tornado was given an EF5 rating along a 144.57 mile long path and a width of 2.3 miles.

The Webster EF5 crossing US Route 12.

Damage to a neighborhood in Webster.

What's left to a farm after the EF5 with winds excess of 295 mph hit the farm head on.

A 2 by 4 wedged into the ground by the violent EF5.

EF5 damage to a house in Webster.

High-end EF4 damage to a house in Webster.

High-end EF4 damage to a house in Webster.

High-end EF4 damage to a house near Webster. 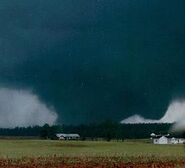 The EF5 near a farm.

The high-end EF4 over a neighborhood 1 mile west of Webster.

The tornado as a high-end EF1.

The tornado during it's dissipation stage.

The convective outlook for October 31, 2018.
Add a photo to this gallery

Retrieved from "https://hypotheticaltornadoes.fandom.com/wiki/2018_Webster,_South_Dakota_Tornado?oldid=63931"
Community content is available under CC-BY-SA unless otherwise noted.