Start a Wiki
The 2018 Wilco-Dimmitt, Texas Tornado was a violent and catastrophic, high-end EF4-rated tornado. Tracking 157.78 miles, 59 were killed, along with 4,872 injuries, and $5.56 billion damages through a path in rural Western Texas. The EF4 was apart of a two day outbreak that caused multiple violent, deadly, and long-tracked tornadoes.

After a violent and catastrophic day for tornadoes, the system that developed the outbreak was expected to spawn multiple severe or violent tornadoes. At 7:41 PM CDT, the long tracked tornado touched down near Wilco as a weak tornado.

Schools, restaurants, car dealerships, businesses, stores, homes, mobile homes, subdivisions, steel-reinforcement buildings, and hospitals were destroyed. Dozens of farms even were destroyed along with wind farms being badly damaged. A Lowe's was demolished, along with multiple grocery stores. Ground scouring was recorded and thousands of cars were tossed considerable distances, while some were never found. In all, 36 were killed at all of those locations, along with 4,860 being injured.

Reaching peak strength at 9:55 PM CDT, 3 more were killed, along with 10 injuries as a warehouse was completely leveled. Gradually loosing strength, EF2 to EF3 damage occurred to many homes, causing million in damage and no deaths or injuries near Texas Dimmitt.

On January 1 and 2 of 2019, the NWS have the tornado a high-end EF4 rating, citing that most well-built homes that were leveled were not completely swept away. In all, the path of the EF4 reached 157.78 miles long and 1.1 miles wide. 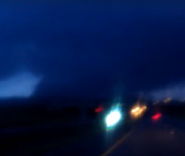 The system that created the violent tornado 12 hours after the tornado.

The funnel cloud that would create the Wilco-Dimmitt, Texas high-end EF4.

A photo of the tornado touching down outside of Wilco.
Add a photo to this gallery
Retrieved from "https://hypotheticaltornadoes.fandom.com/wiki/2018_Wilco-Dimmitt,_Texas_Tornado?oldid=63940"
Community content is available under CC-BY-SA unless otherwise noted.