At 10:30 PM CDT, a tornado warning was issued for Greene County and 2 other counties. 30 minutes later at 11:00 PM EST, the funnel cloud that would produce the EF5 touched down southwest of Xenia.

Intensifying quickly, EF3 damage occurred to multiple homes. Minor ground scouring occurred and damage in these areas were rated high-end EF3. The tornado continued to intensify, becoming an EF4 a mile south of Xenia. Because of the size and strength of the tornado, a tornado emergency was issued for Xenia.

High-end EF4 damage occurred in a neighborhood in Xenia. 4 were killed and 92 were injured. The tornado then strengthened to an EF5 in downtown Xenia. Severe ground scouring occurred in Xenia and several businesses in downtown Xenia were completely swept away. Thousands of homes were leveled over a 2 mile-radius, killing 31 and injuring 5,391.

Farms were completely leveled, causing further EF5 damage and killing a person. Another 5 were injured around this area as well. Thousands of cars, in addition, were thrown up to 1,200 yards and found mangled beyond recognition.

The tornado began to weaken, producing mid-range to high-end EF4 damage. The final 2 injuries occurred when a house was destroyed. The tornado continued to weaken, producing high-end EF2 to low-end EF3 damage to multiple farms. A ranch house was severely damaged as well. Continuing to weaken, EF1 to EF2 damage occurred to a McDonald's . By 11:50 PM CDT, EF0 damage was mostly recorded. At 11:59 PM CDT, the tornado dissipated after killing 36 people, injuring 5,490, and causing $1 billion (2018 USD) in damages.

The following day, the NWS sent multiple survey teams to survey the damage. The final rating was an EF5. The final damage path reached 39.16 miles long and 1.3 miles wide.

EF5 damage to an oil rig near Xenia. 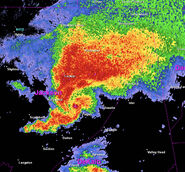 The Xenia EF5 on radar.

High-end EF4 damage in Xenia.
Add a photo to this gallery

Retrieved from "https://hypotheticaltornadoes.fandom.com/wiki/2018_Xenia,_Ohio_Tornado?oldid=63855"
Community content is available under CC-BY-SA unless otherwise noted.