The 2022 San Diego-Carlsbad-Vista tornado was an extremely violent, deadly, and long-tracked as well as rare and historic tornado that occurred in San Diego and Riverside counties of Southern California. The tornado was an astronomically rare occurrence for the region, and its strength even topped almost all other tornadoes in the country, including those in the Great Plains and Dixie Alley. It set several records for its strength as well as damage and deaths, and became the center of thousands of scientific studies.

The tornado was the strongest in the historic November 7, 2022 tornado outbreak that affected most of Arizona and Southern Califonia, as well as other places in the desert southwest. This particular tornado touched down in the Miramar community of San Diego and moved northward, causing immense devastation in the central segment of its path, epecially in Vista. Most the staggering 1,559 fatalities occured in schools and cars, though many others were killed for not heeding the tornado emergency that was issued as Southern California had never experienced a violent tornado before. Additionally, many homes were not equipped with basements.

Throughout its path, 1,559 were killed, 4,938 were injured, and over $8 billion dollars in damage were done, making it on of the deadliest and the costliest tornadoes on record. A small, personal weather station in a business that got by the tornado at peak recorded wind speeds of 248mph before the building was completely destroyed, making it one of the strongest recorded tornadoes ever recorded. It was also caused the first ever tornado emergency to be issued in California.

The tornado was on thr ground for 51.48 miles and for 1 hour and 7 minutes, and moved through San Diego and Orange counties, and disippated just after entering Riverside county. The supercell that produced the tornado als produced the EF3 that struck Tijuana as well as a brief EF1 in Chula Vista, and after prodcuing the EF5 tornado it dropped an EF2 that killed several people in Moreno Valley. Though the supercell did not produce any tornadoes after that, it continued north for another hour. Debris from when the tornado moved through Encinitas and Vista was lofted so high into the supercell that some debris was carried for quite a distance. While heavier debris, like the aforementioned textbook, fell in communites close to Vista, like Fallbrook, lighter debris was carried much further. Notable instaces include a traffic ticket from the Superior Court North County Division that was found 55 miles away in Beaumont, a CVS receipt from the CVS just north of Rancho Buena Vista High School along South Melrose Drive and Shadowridge Road that was found 65 miles away in San Bernardino, and a report card from a La Costa Canyon High School student who lived in the neighborhood that sustained EF5 damage across the street from the school that was found in Lake Havasu City - a whopping 192 miles away. The report card in question had been lofted into the very upper level circulation of the supercell, which was then transferred into the upper level circulation of a second supercell that developed over the San Bernardino mountains, which carried the report card all the way to the California-Arizona border, where it was found by a McDonald's employee.

In the immediate aftermath, California governor Gavin Newsom issued a state of emergency for San Diego and Orange counties in California, particuarily for the communities hit by the tornado. The industrial parks in Sorrento Valley and Bressi Ranch that were hit hard by the tornado suffered severe damage, as well as the Vista Unified School District, leading to a spike of unemployment in those communities. While other strong tornadoes had hit downtown areas of cities, such as the Moore, Oklahoma tornadoes of 2013 and 1999, the Joplin, Missouri tornado in 2011 and the Tuscaloosa, Alabama tornado in 2011, the Vista tornado was the first one to continuously track over densely populated, urban areas in a metropolitan area with over 3 million residents, which is why the death and damage toll was staggeringly high.

The San Diego branch of American Red Cross reported that nearly 35% of Vista had been damaged, with 5% of the city sustaining EF2 or higher damage. Addtionally, as mentioned earlier, the tornado caused masssive losses to the Vista Unified School District, as the Rancho Buena Vista High School, Breeze Hill Elementary School, Vista Innovation & Design Academy, and Maryland Elementary School campuses were largely destroyed by EF5 winds, the Lake Elementary School campus was significantly damaged at EF3 strength, and the Madison Middle School campus sustained light damage by the edge of the tornado. While not directly impacted by the tornado, the tornado had a powerful rear flank downdraft (RFD) which was feeding the tornado from the east, and which directly struck Guajome Park Academcy, downing dozens of trees across campus, shattering a few windows, and depositing debris from the tornado.

The tornado was one of the deadliest on record in the United States, as well as worldwide. A case report showed that upwards of 52% of fatalities occurred at schools, with the highest numbers being 256 killed at Rancho Buena Vista High School, 311 at Breeze Hill Elementary School, and 193 at Maryland Middle School. Another large source of fatalities were those that occurred in vehicles. The tornado crossed Melrose Drive - which is one of the busiest non-highway roads in San Diego county - at several locations, tossing cars off the road, and in some cases, carrying them long distances and mangling them. The tornado also crossed Ronald Packard Parkway, or California State Route 78, causing EF5 damage to building surrounding the highway and scouring pavement off, mangling 11 cars that got caught in the tornado at that location. Of the 14 people in the 11 cars, 10 were killed. Amazingly, the 4 people who were not killed were a family of 4 whose minivan was kept from being sucked into the tornado by a large air conditiong unit from the nearby LA Fitness Building that landed on the hood of the car, keeping it anchored.

At the time of disippation, the tornado was the both the deadliest tornado as well as costliest in not only the United States, but also worldwide. The tornado surpassed the deatholl of the Daulatpur–Saturia, Bangladesh tornado in 1989 by 259, and shattered the Joplin tornado's old record of $3.1 billion for being the costliest tornado on record.

In terms of strength, the tornado was the first violent tornado to occur west of the Rocky Mountains, though 6 other tornadoes would also break this landmark later in the day. The tornado was also the first EF5 tornado to occur west of the Rocky Mountains, though, once again, this record would also be met by 2 other tornadoes that day. However, this tornado was the strongest out of the 3, as an office weather station would record a 248mph gust before being knocked out of commission, making it stronger than many other tornadoes of its rating. Damage from the tornado, especially its pavement scouring and ability to copletely destroy large and well-built, non-residential buildings supports the idea that the tornado may have exceeded 260mph winds, making it in the top 10% of F5 or EF5 tornadoes. In a few locations, especially around Pohl Plaza, damage was so extreme that damage surveyors had trouble making out what damage indicators existed in the area.

The following gallery shows the areas of the tornado's path that were marked with EF5 damage indicators. 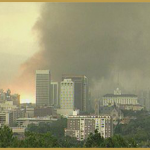 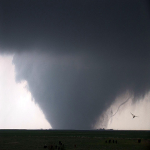 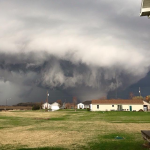 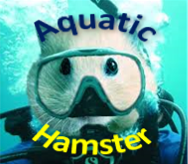