Start a Wiki
In the afternoon of Thursday, April 27, 2028, a large, violent EF5 rated tornado hit the city of Wynnewood, Oklahoma, causing 67 fatalities, 142 injuries, and $2.16 billion dollars in damages. The tornado is the second EF4/EF5 tornado to hit Wynnewood. An EF4 hit the city in 2016, causing a death.

The tornado first touched down at 3:16 PM CDT 23.1 miles west of Caddo. After tracking for over 50 miles causing EF0-EF2 damage, the tornado strengthened into an EF5, causing 51 deaths around Wynnewood, along with 36 injuries.

Multiple neighborhoods were destroyed as the slow moving twister caused EF4 to EF5 damage. Over a dozen car dealerships were completely leveled by the monster EF5.

Multiple other injuries occurred along the path as the tornado caused various types of damage around Wynnewood. Another 12 deaths occurred as the EF5 with wind speeds of about 210 mph destroyed a car dealership. Another 56 were injured.

As the tornado was causing EF2 to high-end EF4 damage, another 3 were killed when a mobile home was destroyed. The final death occurred as a person's car was thrown over a football field away.

At 5:43 PM CDT, the tornado lifted, after causing 67 deaths, 142 injuries and $2.16 billion in damages. Afterwards, a state of emergency was declared for Wynnewood.

The EF5 wedge near Katie. 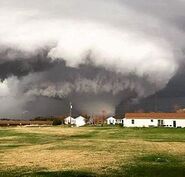 EF5 damage to an apartment complex in Wynnewood.

The storm that would produce the Wynnewood EF5.

EF5 damage to a well-built house near Katie.

EF5 damage to a property in Wynnewood.

An aerial of a neighborhood in Wynnewood.

The EF5 near Wynnewood.

Th EF5 near a school in Katie. 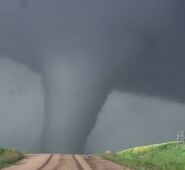 The Wynnewood EF5 as an EF3.
Add a photo to this gallery

Retrieved from "https://hypotheticaltornadoes.fandom.com/wiki/2028_Wynnewood,_Oklahoma_Tornado?oldid=64053"
Community content is available under CC-BY-SA unless otherwise noted.