The 2036 Monahans-Midland tornado was one of the most violent tornadoes to ever touch down. First noted as it made the transition into a supercell near Pecos, Texas, the system gradually came into a more tornadically ideal environment, before the parent mesocyclone first gave birth to an EF1 tornado along I20 to the southwest of Monahans. Moving northeast at an average speed of 35 mph for most of its life, the tornado would pass through Monahans as an EF2, before slowly gathering strength as it hit Penwell as an EF4. Exiting Penwell, the tornado intensified further to achieve EF5 intensity, which the system would retain for most of its remaining life. The tornado hit Odessa and Midland whilst at EF5 intensity, causing catastrophic damage along much of its often 2 mile wide path length, reducing hundreds of homes to bare slabs or piles of debris along the way. After passing through Midland, the tornado rapidly weakened, and lifted to the northeast of Midland after being on the ground for 99 minutes. During its time on the ground, the tornado was under close surveillance from mobile radar systems, which recorded a peak wind of 324 mph, and claiming a new record highest wind speed in the process. 66 people died, 257 others were injured, and $3.2 billion was done in damages. 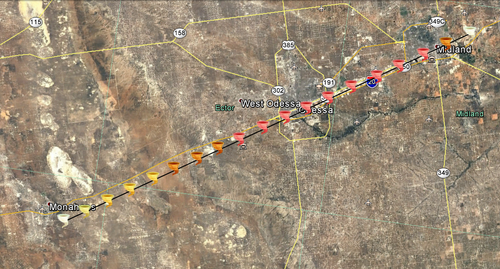 The Monahans-Midland tornado was first traced to a severe thunderstorm that formed near Pecos, Texas. Moving northeast at an average speed of 35 mph, a speed it would maintain for most of its life, it made the transition into a supercellular storm as it began to parallel the I20 corridor, where a wall cloud and funnel was reported to the south west of Monahans at 1315 CDT. Continuing to intensify, the storm dropped its tornado at 1324 CDT along I20, causing significant damage to trees at its initial EF1 intensity. Continuing towards Monahans, the tornado attained EF2 intensity as it moved into the town, ripping the roofs off 7 well built homes, and destroying 15 outhouses in the process.

Moving out of the town, the tornado intensified into an EF3, where it levelled a poorly constructed home, before moving onto Penwell as it attained EF4 intensity. In Penwell, the tornado dramatically grew in size, and sept away 14 homes completely. However, only an EF4 rating was applied here, as many of the swept away homes were not anchored to their foundations properly. Extensive ground scouring was noted, and several trees were snapped down to stubs, one of which fell on a mobile home, killing 2 people inside in the process.

Moving out of Penwell, the now 2 mile tornado began to bear down on Odessa, where a tornado emergency was declared, with significant damage to property highly likely. Severe ground scouring, upto 12 inches deep was noted in this area, and catastrophic damage also occurred, with the tornado sweeping away hundreds of structures so completely there was little evidence left behind of them ever existing before the event. At 4 of the locations, the foundation slabs were so badly damaged that they had also been partially swept away as well. Around this time also, a mobile Dopplar radar unit recorded a wind of 324 mph, the highest ever documented on the planet. Around this time, the tornado completely swept away a Suzuki-Honda-Kawasaki garage, damaging the cars so severely that they were barely recognisable when found nearly 2 miles away from where they originated, wrapped around debarked trees. Also falling victim to the tornado were the Ector County Library, which was levelled and swept away, leaving little behind at that location. Several churches took severe damage, and the MCH Medical Center was bent 17 inches off its foundation and partially swept away by the force of the tornadic winds. Also falling victim to the tornado was the Odessa Regional Medical Center, which was completely swept clean of its foundation. At this location, the foundation was also badly compromised, and partially swept away. Papers were found embedded into the ripped up asphalt car park, and cars were found torn apart and their pieces scattered over very long distances. At these locations, 35 people died, and 91 were injured. Damages in this area were estimated at $2 billion.

Moving out of the town and towards the city of Midland, another tornado emergency was declared. The tornado peaked in intensity, before entering the city, where more incredible damage was inflicted, with several more buildings being swept away. Of the areas affected, the Big Sky Theatre was one of the worst cases, with the entirety of the structure, including the foundation so severely compromised that the building needed a complete rebuild folowing the event. 2 hotels in the area had their top floors gutted out completely, and several more homes were swept away. Weakening to an EF4, the tornado passed near Henderson Elementary, where the school withstood severe damage, and was partially swept away, and 2 people were killed. Moving away from the center of the city, the tornado began to rapidly weaken, and a fire department took lower bound EF4 damage before the twister moved on. Another fire department on the outskirts of the city withstood EF2 damage when the building had its roof torn off. After this, the tornado weakened more, and snapped several power poles before weakening to an EF1 and snapping hundreds of trees before lifting. In Midland, 27 people died, and 121 others were injured. Damages here were estimated at $1.2 billion.

Immediately following the event, the local county officials declared states of emergencies for the areas affected worst by the tornado. In Monahans, a plea for assistance was made, but was denied by the president as the damage wasn't deemed severe enough for federal assistance. In Penwell, another plea was made, and $1 million was given to aid in the recovery efforts, and the buildings damaged were rebuilt following the event. In Odessa and Midland, the president sent in FEMA officials to aid in the recovery of bodies, the cleanup operations, and the rebuilding processes. The president also allowed people affected in the worst hit areas a month to apply for federal assistance in rebuilding their homes and businesses. In the months following the tornado, about $500 million was given to victims of the tornado in Odessa and Midland, and he recovery process began, being finished 5 years after the event.

The 2036 Monahans-Midland tornado was the strongest tornado to touch down in terms of wind speed, breaking the 318 mph wind speed record set by the 1999 Bridge Creek-Moore tornado in 1999. This tornado was also one of the longest in Texas's tornado hiastory, having travelled 57.6 miles in 99 minutes. Along much of the damage path from the tornado, the damage was assesed as being at EF5 intensity. Well built structures that bore the brunt of the 300 mph winds were completely swept clean, with the foundations being mostly swept away in the worst cases as well. The hospital the tornado so badly compromised had to be torn down and rebuilt. Much of Henderson Elementary was also badly damaged to the point that much of the school needed rebuilding following the event, with school children having to attend a different school whilst the work was undertaken, which took a year to complete. Overall, the tornado was pretty well forecast by meteorolgists, with an average lead time of around 9 minutes for areas affected by the storm, helping to reduce the death toll to its still pretty high 66 people.

Community content is available under CC-BY-SA unless otherwise noted.
Advertisement